CEO of Shibuya Productions, co-producer of Shenmue 3, confirms that Sony won't be getting any money from the Kickstarter. 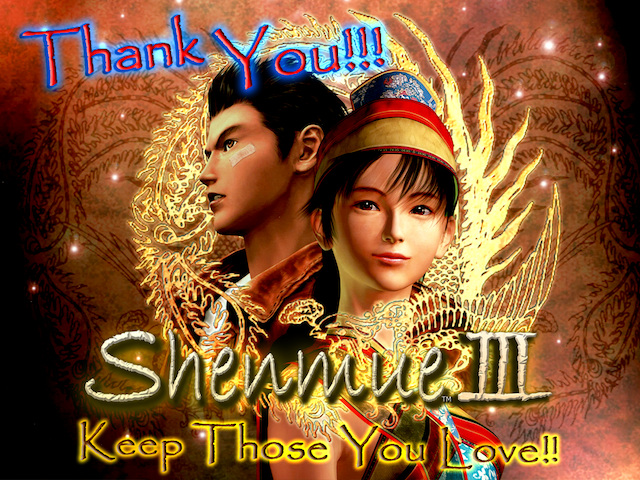 Sony’s involvement in the Shenmue 3 project has left many scratching their heads. Developer Yu Suzuki insists that the game will be dependent on Kickstarter funding in order to be made, and that the initial $2 million goal would only get fans the bare minimum.

Some fans were concerned about the omission of details of Sony’s involvement from the Kickstarter page, but it turns out that Sony isn't as involved as fans believe it is. Their statement that they will be helping development through Third-Party Production still holds; had Sony decided to fully fund it themselves, they would have run into some licensing issues with Sega, as it would become a first party title.

The Kickstarter was also meant to be a test of fan interest. Sony’s Adam Boyes estimated that it would’ve taken them two years to even prove the demand for the game, which would delay the process of securing funding as well. The Shenmue 3 Kickstarter manages to hit two birds with one stone, and does in 10 hours what would’ve taken Sony years. That means the games will get put into fans’ hands sooner.

In Yu Suzuki’s recent Reddit AMA, he admits, “[I]f we reach the $5 mil mark, one of the things I really want to do with Shenmue 3 will become a reality. At $10 million, it will truly have the features of an open world.” That seems like a lot, but all this funding is going into the game, though. Shibuya Productions CEO Cedric Biscay – whose company is co-producing Shenmue 3 – confirms in a tweet that “Sony is providing various supports, including marketing and investment, to YSNet. However, SONY is just one of many backers of #Shenmue3” and that Sony would not be receiving any money from the Kickstarter fund; they would actually be putting out money to finance the PlayStation 4 version.

Shenmue 3’s Kickstarter campaign has hit over $3.5 million as of this writing, with 25 days left to go. Stretch goals have been revealed, and there are some pretty sweet backer rewards.