The Xbox One may be set to receive new computer-like functionalities, if this new source is to be believed.

The source is a Microsoft employee who recently did a Reddit AMA, using the name BADF00D.

So, these are BADF00D’s bombshells: 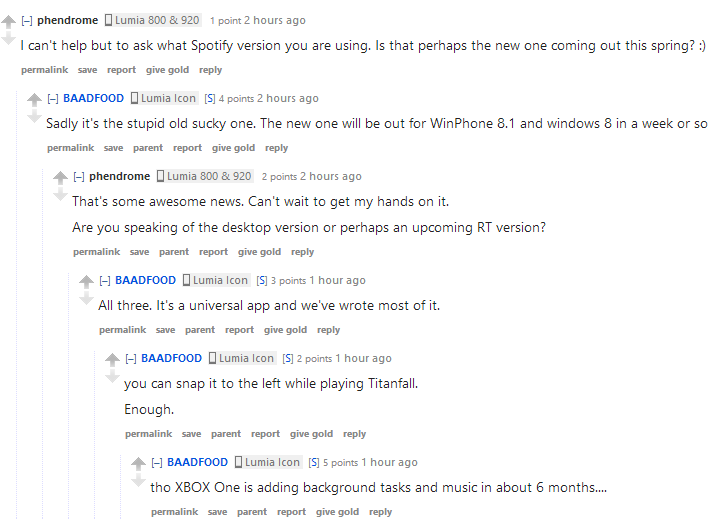 Since he brought up Spotify and music separately, it seems he's referring to playing music in the background while doing something else, like web browsing. We already know Xbox One has an Xbox Music app, much like what's on Windows Phone and Windows 8.

Now, let’s hold up a few steps back. What, you might ask, is a universal app? Microsoft is finally optimizing their work, building operating systems together, and making apps that run exactly the same on their phones, computers, and the Xbox One. So, that said Spotify app the devs have been working on Is literally the same as what consumers will get on their Surfaces and Windows Phones.

BADF00D has also revealed interesting information regarding app development in general, stating that the dev team has a six to eight month timetable for adding small to medium sized features, and one to two years for major updates. What this means to you as an Xbox gamer is you can expect apps to hit your console that much rapidly, and about as fast as Windows Phone and Windows 8 owners. We have no guarantees on who’ll get them first, but that’s certainly something to look forward to, isn’t it? You can get more details from the Reddit here.