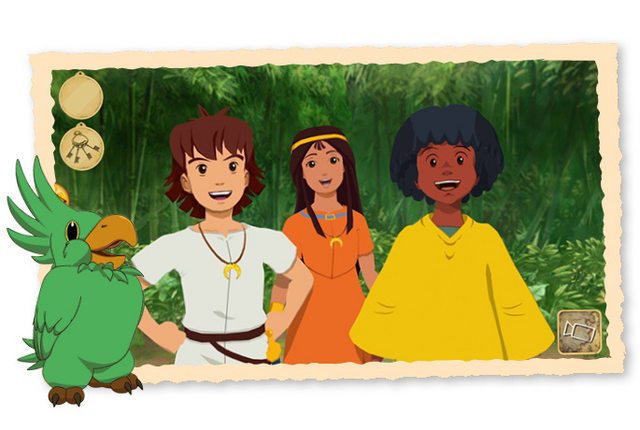 For kids who remember it,Mysterious Cities of Gold was the diamond in a rough of commercialized 80s cartoons. A new show and game is now in the works, and game devs Ynnis Interactive has taken to Kickstarter to fund international localization.

First, a brief explanation. The original Mysterious Cities of Gold was a coproduction of Japanese animation studio Pierrot and DiC, shown worldwide in major networks like Nickelodeon, BBC, and NHK. It detailed the perilous travels of three children exploring South America, and was fondly remembered for its historical focus and atypically intelligent writing.

After thirty years, a new season of the show is finally in production, and game developers Ynnis and Neko Entertainment have been contracted to make the official game, Mysterious Cities of Gold Secret Paths. True to form, the MCOG will also be unusual for a franchise game; since it explores elements of the new show’s storyline, it will get free episodic updates to coincide with when the new episodes are aired in France.

Ynnis cites overwhelming fan demand from around the world as the reason why they are pursuing the crowdfund.  The game is already set for development on Wii U, 3DS and iOS platforms, but only in French. If successful, the campaign will add a PC port, full localization in English, and Spanish subtitles. The goal has been set at $ 30,000, and additional funds will be used to advance localization into even more languages.

I cannot be the only one here who was a fan of the show and wants to see this get made. Ynnis has until September 29 to secure the needed funds, so if you would like to support them, please share this campaign and donate if you can! You can guarantee yourself a copy of the game as well.