Here's what the biggest changes and features are in Patch 2.4 for Diablo III.

Diablo 3's latest patch brings the game up to version 2.4, adding a ton of new content to the game and building upon its expansion pack, Reaper of Souls. For gamers returning to Diablo 3 and those who have yet to pick it up, we decided to take a look at what the new patch has to offer and why you should play it.

You can read the full patch notes here, if you want, but for those of you who don't, here are the main features worth looking at.

Gamers who've collected just about everything in Diablo 3 will be rewarded for their efforts to collect every set item in the game. The biggest feature in Patch 2.4 is the addition of 24 Set Dungeons, which are unlocked to players who have all six pieces of any given set. Owning the set will unlock a set dungeon, which you'll have to locate through hints in Leoric's Library.

The patch adds an all new area to the game called Greyhollow Island. It's a never-before-referenced area that's accessible through the Act V map in Adventure Mode. It's features an entirely new tileset with all new monsters for you to hunt and kill by the dozens, and even comes with its own set of events and bounties.

Starting with Season 5, players can now unlock new stash slots for their characters. Inventory space is hard to come by, so having an all new stash slot makes all the difference. The only catch is that you'll need to level a new Seasonal character up to level 70 and complete Seasonal objectives. Oh, and you'll need 500,000 in gold, but that shouldn't be too hard to come by.

If you're tired of playing your old characters but want to retain their names, achievements, and character record, you can transform a non-seasonal hero (or a hero from a previous season) to a fresh level 1 character to play as in Season 5. All the items and recipes you've unlocked will be sent to your mail for your other characters to use, so you won't lose a thing.

Some new gameplay mechanics from the console versions of Diablo III have been brought over to the PC version. Players are now encouraged to kill multiple enemies in an unbroken chain for boosts to movement speed, bonus XP and resource generation. There's Massacre, Destruction and Trap Mastery bonuses that encourage fast-paced and tactical kills.

There's never been any real reason to have cosmetic pets summoned until this latest patch. They'll now pick up gold for you, so you don't have to.

In addition to updated sets, the patch adds a ton of new Legendaries including Kyoshiro's Blade, Wilken's Reach, Blade of the Tribes, and The Twisted Sword. Many of these items are designed to amplify existing abilities for different classes and can be potential gamechangers. 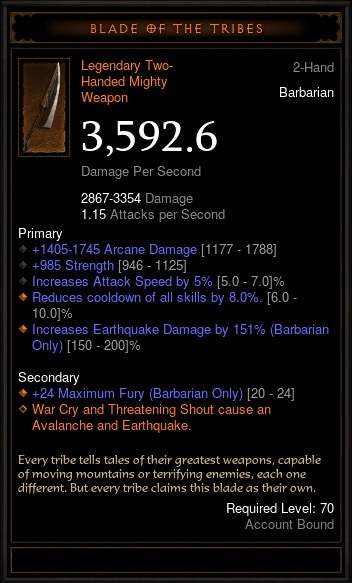 The new patch makes it easy to locate Keywardens, which you need to kill to build the Hellfire Ring (check out our old guide, which still works). The new patch adds a compass indicator on your map to let you know if a Keywarden is in the area so you won't have to scour the entire map only to discover that there's no Keywarden.

Tell us what your favorite new changes and features are in the comments below.