Fans are speculating that Pete Hines is about to crack from all the fans asking him about Fallout 4.

In fact, you could say he already did, looking at these tweets below. 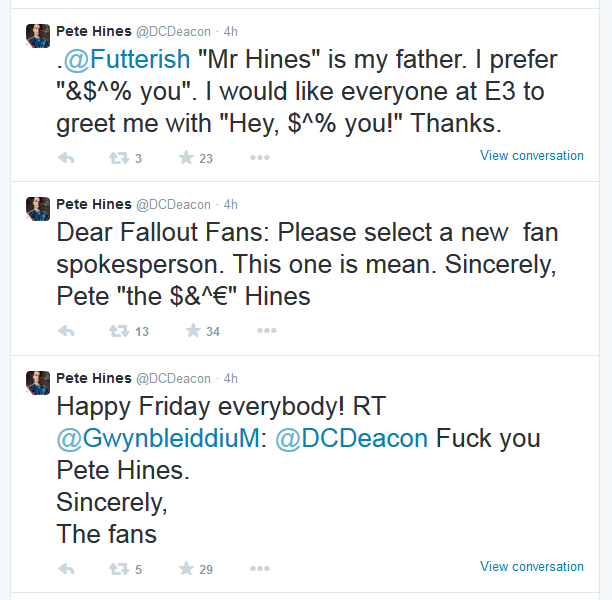 Fans take the opportunity to talk about Pete’s work as a community manager, and reviews aren’t exactly glowing. Some people say he has always had a bad attitude (I’m using less colorful language here, of course).

They also cite his reaction to Survivor 2299 (taking credit for closing the fansite after letting it run for so long), and his general lack of cordiality to difficult fans as signs that he has done poorly at his job.

Other fans to go in Hines’ defense, pointing out his job is difficult, and perhaps, at the moment, he is just doing his job to the letter. They also explain the Survivor 2299 thing, stating that Bethesda opted not to reply to it at 1st to stem it from spreading, and taking action when things came to a head.

Of course, some fans took it as an opportunity to ‘confirm’ Fallout 4. For some fans though, the game’s existence is a foregone conclusion, and they feel Hines should just be left alone until Bethesda releases official word. We keep tabs on this story, of course, and will keep you up to date on when Fallout 4 is confirmed, and more official details revealed.

Image is from Fallout New Vegas.