to be made by Mike Diskett and 5 Lives Studios 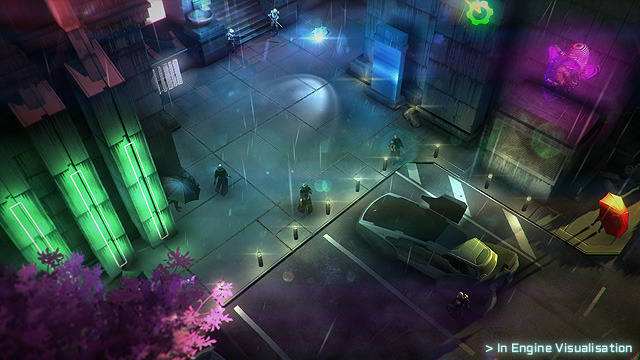 A month after teasing the game and Kickstarter with a brief trailer, 5 Lives Studios has unveiled the Kickstarter for Satellite Reign. Pitched as a spiritual successor to Syndicate Wars, if funded succesfully, it will be developed by a five man team that includes Syndicate Wars creator Mike Diskett.

The Kickstarter has also revealed more details about the game's premise and production. Set in a fully simulated cyberpunk city, Satellite Reign is a real-time class-based strategy game with a marked direction towards encouraging emergent gameplay.

In Satellite Reign, the world governments are run by corporations, and gaps between the wealthy and powerful and the poor expand to extreme levels. A secret organization arises to fight the power, and the game will give you the agency to choose to fight the elites for the sake of the underprivileged, or to take power for yourself.

The city simulation is designed in such a way that characters and elements in the environment will react uniquely to your actions. Furthermore, linear missions will be eschewed for more open ended gameplay. For example, you can choose to attack enemies directly, or covertly earn resources by robbing banks or kidnapping doctors. Character classes will have different weapons and abilities, so that they take different approaches to handling objectives and situations.

5 Lives Studios is aiming for 350,000 pounds, but claim the game will be designed in such a way that it is scalable. To enable that flexibility, they are using Unity for the game engine. The team also claims to have experience making good games with limited resources.

Satellite Reign will be released on PC, for Windows, Mac OS X, and Linux. No details have been given about digital distribution platforms like Steam and GOG or possible ports to consoles.