Japan’s Console Market at its Lowest Point in 24 Years

Despite the launch of the PS4 and Xbox One in the country in 2014. 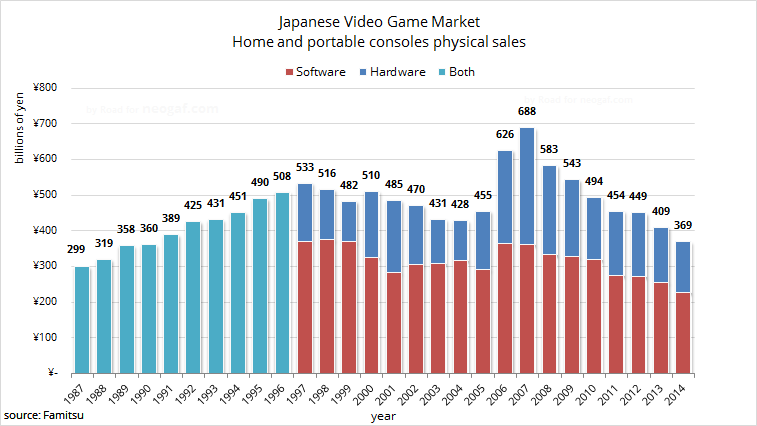 Sales of console hardware and software fell to their lowest point in 24 years in Japan during 2014.

Japanese gamers purchased fewer consoles and physical console games than at any point since 1990, when the SNES launched in the country, last year.

Despite the release of the PlayStation 4 and Xbox One in Japan, sales figures from Famitsu, as translated by NeoGAF, show the extent of the decline.

Total physical games sales for handhelds and home consoles generated 369 billion yen in 2014, down from a record of 688 billion yen in 2007. Unsurprisingly, the 3DS was the best selling console, shifting 3.1 million units. To date, 17.8 million 3DS systems have been sold in Japan. In second place was the PlayStation Vita, which was purchased by 1.1 million gamers, for a lifetime Japanese total of 3.4 million.

Eight of the top selling games in Japan last year were 3DS titles, while the remaining two were Wii U games. The best selling game was Yo-kai Watch 2, a Level 5 RPG, which shifted more than three million copies. Pokemon Omega Ruby and Alpha Sapphire notched up 2.4 million.

PC gaming has never been a massive force in Japan and digital console game sales remain low. Japanese gamers have flocked to mobile titles in recent years and it seems that this is an irreversible trend.