Are you jumping into Red Dead Online? Rockstar has taken to the PlayStation Blog to detail the Red Dead Online and officially announce that the beta is live for everyone.

If you are playing on PlayStation you might be happy to know that you will be receiving first access to certain items. In addition to that, Rockstar also noted that Red Dead Online will be a living online portion of the game, allowing it to change over time with new features added and old features removed.

Similar to the story mode, players will have an honor system and depending on your character other characters will treat you subtly different. Honor or outlaw both have their consequences and rewards, and both will have missions that could only be accessed if you obtain enough honor or outlaw status.

The developers went on to talk about the five current modes that players can participate in and detailed them. These are not the only things players can do as there are story missions to complete solo or with your friends as well as races, hunting, fishing and much much more. Check out the five gameplay modes down below:

Classic gunfight modes with unlimited lives. Compete to rack up the most kills before the timer runs out. Sudden death will trigger in the event of a tie: whoever gets the first kill wins.

A true test of resourcefulness in two game modes: use nothing but a bow and a handful of arrows or throwing knives to be the last one standing. With a gradually shrinking player area, there’s nowhere to run.

A tactical race to the top. Every kill pushes you up the scoreboard, but watch out: the closer to the top you are, the more points everyone else gets for killing you.

Work in teams to control the land. Capture a territory to start racking up points: the team with most points wins – or you can win outright by capturing every territory.

Demonstrate your personal specialty in this free-for-all or team based match: the trickier the weapon you use to land the killing blow, the more points you get.

PlayStation members also get first access to a couple of items. We heard about the prior to the game’s launch but now players on PlayStation will be able to get the Grizzlies outlaw outfit, red chestnut arabian horse, and high roller double action revolver. Check out each of the items down below: 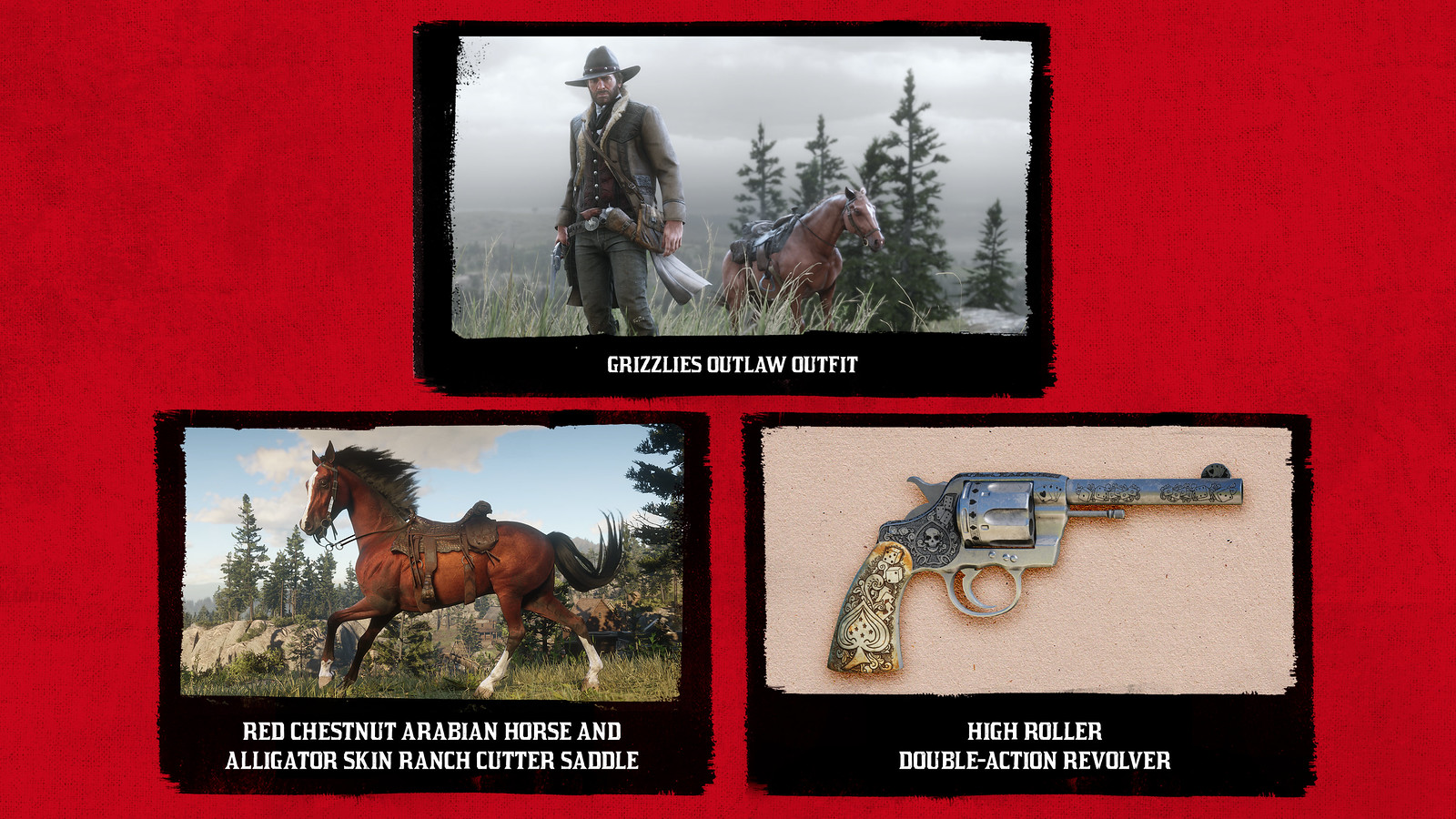 To pick up this slick but rugged look, open up your satchel by holding the left directional button to open the catalog. Navigate to the outfits and claim this outfit for free. You can put it on at your Camp’s wardrobe.

In addition, you can equip the Alligator Skin Ranch Cutter Saddle that includes core Health and Stamina boosts for your horse by claiming it from the Special Saddle section of the Tack and Services menu.

This polished steel and beautifully engraved revolver is available at Fences. Swing by to pick this up for free.

Earlier today, Rockstar Games released a new patch for Red Dead Redemption, fixing a slew of various things such as missing campanion in camp, issues with guns and clothing, plus plenty of other needed fixes. Check out the full set of patch notes right here!

Red Dead Redemption 2 is now available for PS4 and Xbox One.