4A Games Reveals Tons of News for Metro Exodus Monsters, Factions and Hazards 4A Games’ upcoming instalment in their Metro franchise, Metro Exodus, enjoyed a strong E3 presence. Now that E3 is over and done with, the studio updated the official Metro Exodus website with tons of details regarding different weapons, factions and hazards in various seasons.

The post-apocalyptic society of the Moscow Metro is formed from a collection of independent stations and powerful Factions. After years of bloody civil war between the fascists of Reich and communists of Redline, Hanza are now the dominant group. They have remained a relatively benign presence, promoting commerce and social freedoms, and are natural allies of the elite Spartan Order, who still strive to maintain peace in the Metro…

Everywhere on the surface of Moscow is cloaked in a veil of dangerous radiation. To breath in this environment, Artyom and the Rangers must wear gas masks at all times on the surface. The Spartan Order had believed that outside of Moscow was just as uninhabitable, until now…

The apex predator of the food chain. The Demon, a huge winged beast, is well known to Metro residents as one of the deadliest creatures around. Like a grotesque bird of prey this creature hunts alone and, thanks to its strength, can easily grab prey of any size from the ground. It is often best to stay clear of these completely when seen, pick your path carefully and remain under cover to avoid being picked up.

Pack hunters of the Russian wasteland. With protruding joints, fearsome claws and yellowing teeth, the Watchman is one of the most common creatures in post-apocalyptic Russia. Running in packs, these savage mutants stalk every street and tunnel. A lone Watchman is no match for a trained Spartan, but their sentries can quickly summon reinforcements if not dealt with quickly and quietly… 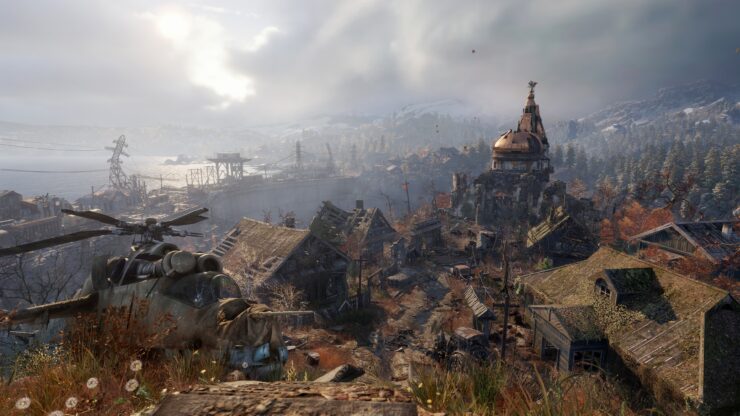 Many closed communities have evolved in the wasteland, but few are stranger than the fanatics near the Volga river. Believing all technology has been man’s folly, and only its rejection will bring them salvation, these fanatics, under the watchful eye of their sinister and oddly charismatic leader Silantius, have taken to worshipping a great and powerful beast that lurks beneath the water…

When there is no hope of ever returning to normal life, it is no surprise that gangs of bandits have sprung up across the wasteland. Ferocious and merciless, those that have cultivated on the banks of Volga river have seemed to have reached a peace between themselves, and have focussed their attention on terrifying the locals, and robbing them of anything and everything of value.

A buzzing blue ball of electric energy, anomalies are an oddity of the post-apocalyptic world. Extremely dangerous to any within a certain radius, these strangely alluring spheres can appear in day or night, but tend to follow a similar path every time.

Nightmarish creatures descended from humans. At first glance, these resemble the look and shape of a human. Get closer however and you’ll find a dangerous aggressive creature that attacks on sight. Usually found in groups, they often inhabit dark locations and disused buildings. Their behavior is similar to that of apes, and they often use nearby debris as primitive weapons. Keep your distance and take them down quietly to avoid being overwhelmed.

It was not only creatures above the ground that were shaped by the radiation that plagued the surface. Known as Shrimp, these mysterious aquatic life forms seemed to evolve from some form of crustacean. The male of the species will use its huge shelled arms as a shield and do quite a lot of damage if it takes a swipe at you, whilst the female favors spitting its corrosive mucus from a longer distance.